Background and Ordering
I have made several comments in the RK thread but I thought I’d start my own thread to document some of the changes as I go since I will be doing my suspension in a few stages.

I just rolled over 9000mi In my Rubicon. Afterdoing a bit of rockcrawling and getting stuck on pretty much my first obstacle I decided I needed a few upgrades. First I put a winch and bumper on and next it was time for a lift. After spending some time looking at the options the RK Pro-X is what I decided I wanted but I didn’t want to spend all the money up front for that so I decided to go with the Max Travel package. At first I was going to reuse factory shocks with extensions, but I failed to find any extensions in stock that would work and at $800 for the RK shocks I figured instead of throwing money away on the extensions I would go ahead and order the shocks.
I order the parts from @Northridge4x4 . I have found Northridge service to be good and have good availability of stock compared to many places. I had to call my order in as I already purchased an adjustable track bar from Synergy and planned to keep it and would not be needing the one that typically comes in the kit. As luck would have it, the RK track bar was the only thing on back order. So I ordered the kit on Tuesday and it was delivered from two different Northridge warehouse and everything arrived on Thursday and Friday by about 1 o clock.


Once it arrived I loaded it up and drove over to my friends shop.
I started around 4pm and worked till about 12am (diner break included) at which time I had all of the front installed but had not torqued everything up yet. All in all the install went well. A few of the biggest challenges were torquing the A arms jam nuts (the max travel kit only comes lower front A arms) and reinstalling the front A arms. I was using only jacks and jack stands for the install. To get the A arms to line up to the front bumper a ratchet strap was out around the axle and front bumper. This allowed the bolt to be lined up.
Installing the springs was also a bit time consuming. Spring compression tool was used. It might be possible to install without these but I wouldn’t want to try. Although knowing how much energy was being stored in those springs as I compressed them made me quite nervous! Also when installing the lower shock mount bolts it becomes almost impossible to get them in from the outside in due to interference from the A arm because the bolt has more thread than needed. I was going to do this but as we thought about it we realized that meant to change the shock we would need to remove the A arm as well so I decided to just cut the bolt. While this was a good idea I managed to cross thread one of the bolts after cutting it off in the vice. I was able to re-thread the bolt though with a die! This added some unnecessary time to the install on the front. There were several minor things a more experienced installer would have sailed through that slowed me down. I could see someone doing this with similar tools in about half the time if they had the experience. I’m thinking I could do the front in about 5-6 hours if I could do it again.

so once all the components were onI out the wheels on and took my first look at it. With 3” of loft up front and none in the back at this point my friend made the comment “it looks like a puma ready to pounce”.

The next day I returned around 11 pm to start on the back. In short order I had the shocks, springs, and upper A arms removed. I would say in just about an hour this was done.

Next I had to drill some holes for the track bar relocation bracket and for the bump stops. Just working at funny angles made this take longer than one would think.
This time the install went well. All the little tricks I learned on the front made the rear go a bit faster. I finished installing the rear in by about 6 being careful to torque and lock tight everything. Pretty much everything went as planned Lee the instructions except for the nuts for the bump stops were not nylock nuts as stated in the instructions, they were standard nuts. They did not include lock washers either so I used loctite on them. I’m hoping I don’t have any issues here either. Another issue I ran into was trying to install the included bolt for the upper rear sway bar link. The kit included a bolt (and a nut). The factory location includes a welded on nut. When trying to use the included bolt it seemed as if the threads were not the same. At first I thought it was just cross threaded but then the issue repeated itself in the other side so I think the threads were different. I ended up just using the factory hardware without issue.
I then went around ad torqued everything as I applied loctite.
Once that was done I installed the wheels. Now everything looked done but I still needed to torque everything on the front so I took the wheels back off the front and torqued everything up. All in all the front probably took about 9 hrs total with the back taking 7 hrs. Work load for each was similar so the learning curve front to back netted me a couple of hours. Also on the front I had a little bit of help but the back was done completely alone.
OP

First impressions
I had a moment of panic as when I started to drive my anti collision said it was not working as well as my electronic stability control. I had a suspicion this was due to me not centering the steering wheel though. A quick google confirmed this so I centered the steering wheel once I got home and the numerous warning lights went off.
Also initially I thought the ride was rough. I also realized I was running a pretty high tire pressure at 45 psi so I aired down to 32 psi and that seemed to help a bit.
Today I drove 300 miles with 90% interstate driving. The firmer ride is actually a good thing. The truck tracked much better and didn’t tend to wonder. Previously I would not go above 80mph. Now the fox steering stabilizer I installed previously helped some but the new RK suspension took it up another notch. I could drive over 80mph now without that white knuckle, heart pounding, out of control sensation. Secondly, cornering at highway speed was vast improved. I would describe the new feeling as much more sporty. I would say I preferred the ride of the factory suspension but it is a small price to pay for the vastly superior handling.
OP

Up Next
Next up I will install 37’s and report back on how that changes things as well.
After that I will change out factory upper A arms (and at that time work in getting caster in line with RKs recommendation). And upgrade to the pro x triangulated 4 link.
Before that I plan to do some crawling later this month at the place I got stuck while all factory. I am going back to redeem myself with my new and improved truck. 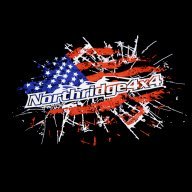