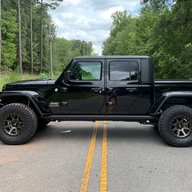 Almost everything has arrived. One exception is I’m still waiting on the track bar brace. They were waiting on more to come back from powder coating. Maybe it will ship this week?

Springs are clearly labeled as being from Eibach, which should be a good thing. The rear springs are very beefy. And the front control arms are also very beefy.

I may go ahead and install the lift and do the track bar brace later when it arrives. More work that way but it’s killing me looking at tires in the garage haha.

I have a YouTube channel so I’ll also do some videos about it; install, before/after lift heights, etc. I’m also going to try to compare the amount of squat in the rear springs with a load, OE vs Rusty’s. Thought that might be useful info for towing or overlanding folks who may have some loads on the rear springs.

Edit: hopefully got the picture rotated correctly. was driving me nuts, haha 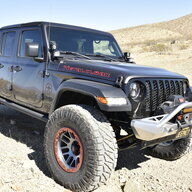 @Scruf... are u installing their shocks too? By the description of the shock length, seems like it is for a 2-3” setup.
OP

DeezJT said:
@Scruf... are u installing their shocks too? By the description of the shock length, seems like it is for a 2-3” setup.
Click to expand...

I called Rusty's and asked for the measurements of their shocks, and picked Fox shocks that were similar. Figured that should be pretty close.

Here's a quick update. I also took video of the parts and compared them with stock etc, but I haven't had a chance to edit yet. So more to come.

Overall, all of the Rusty's components seem to be of very good quality. Springs are noticeably thicker/heavier than the OE springs and are made by Eibach. Control arms are beefy.

I took over a month to get them to ship the front track bar brace. I think they were back ordered and then things kept falling through the cracks and I had to call 3 times to get it shipped. At the moment, I'll on the waiting list with my local Jeep dealer to get the new steering gear box, so I decided to not install the track bar brace until after that work is done. I didn't want any push back from the dealer about having to work around the brace while replacing the gear box.

Front track bar is the jam nut style. Meaning to adjust you have to loosen the jam nut, remove the mounting bolt, turn the bushing end, and then reinstall. The front track bar bushing is extremely tight in the axle mount... I had to hammer it into place which is difficult once the suspension is at ride height. So getting it back out to make any adjustments would be a PITA. If I were shopping for just an adjustable front track bar, I would pay extra to get the type with an adjusting sleeve that can be adjusted without removing the track bar. I knew this going in, and once you've got the front axle centered, it's not something you have to mess with very often. So I don't think it's worth buying a different front track bar to replace the one that comes in the kit.

Rear track bar has to be at it's shortest setting to center the axle. A lot of lifts don't include a rear track bar because there's not as much axle shift as in the front. But I will say the Rusty's rear track bar is much heavier than the stock unit. And if I lift higher in the future, I had the ability to adjust the rear track bar too.

How much lift does it give...

2.5" Front - 1.5" Rear. 1" of rake. Which is exactly what I wanted. I measured that multiple ways, but the most consistent is measuring the length of the shock at stock ride height, and then measuring the shock length at ride height once the lift is on. That takes out any variance from tire size changes.

Ride quality is very good. I do think I feel more small imperfections in the road... but that's likely more of a byproduct of the Fox shocks or E rated tires than the lift. Rear end is less bouncy with the Fox shocks.

It handles like a lifted Jeep. It's just the reality of a Jeep suspension, big tires, and a higher center of gravity. That's not really a complaint, rather an observation. But it definitely doesn't ride/handle like my F150 did for example.

Tires are 35x12.5x17 LT Nitto Ridge Grappler's. Wheels are 17x8.5 with a -6mm offset - Icon Rebounds in matta bronze. I'll note that I ran the tires for a week with the stock suspension and they did not rub at all for normal street driving (note that I have an Overland which doesn't have that air dam thing on the front bumper). And of course with the lift, they don't rub either. I haven't had a chance to flex the suspension off road yet.

I do have a slight vibration at hwy speeds that even after rebalancing the tires 3 tires won't go away. I may try altering tire pressures to see what change that has.


Overall I think it looks awesome. Very happy with the stance. 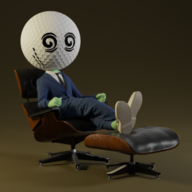 that looks great! I went with the Mopar but was between the Rusty's and the Mopar. Pretty jealous of that set-up you got brotha! Can't wait to hear how it performs.

Very Nice review @Scruf. Gonna stay tuned for the video.
With the front TB, I had the same complaint with my previous JK with RockKrawler TB.
Kudos on the pics!!
OP

sirsamuel764 said:
that looks great! I went with the Mopar but was between the Rusty's and the Mopar. Pretty jealous of that set-up you got brotha! Can't wait to hear how it performs.
Click to expand...

I was in the same boat. It was between the Mopar kit and the Rusty's. I don't think either is a bad option. I justified the Rusty's kit by saying that if I wanted to run 37"s in the future, I could add a 3/4" spacer front and rear, and could adjust the track bars and control arms. Since I have the 3.73 gears, I can definitely say you can feel the impact of the 35"s on the hwy. In town is fine, but on the hwy you can really tell a difference. So I would absolutely regear before going to 37"s. I kinda want to regear even with the 35"s, but can't justify spending more $$$ at the moment, haha.
2020 Gladiator Overland
Rusty's Off-Road 2" lift (2.5" F / 1.5" R)
35x12.5x17 Nitto Ridge Grapplers
17x8.5 Icon Rebound matte bronze wheels (-6mm offset)
https://www.youtube.com/c/ScrufsGarage/
OP

DeezJT said:
Very Nice review @Scruf. Gonna stay tuned for the video.
With the front TB, I had the same complaint with my previous JK with RockKrawler TB.
Kudos on the pics!!
Click to expand...

Yea, I think the tight fitment of the front track bar is just the nature of the beast. You certainly wouldn't want that to be a loose fitment. But it was a pain having to hammer it into place. There just isn't room in there to swing a dead blow hammer. I ended up using a pry bar through the passenger wheel well and hammered it that way.
2020 Gladiator Overland
Rusty's Off-Road 2" lift (2.5" F / 1.5" R)
35x12.5x17 Nitto Ridge Grapplers
17x8.5 Icon Rebound matte bronze wheels (-6mm offset)
https://www.youtube.com/c/ScrufsGarage/
OP

The silver trim of the Overland kinda clashes with the bronze wheels in my option. So I ordered the black out trim for the grill (it arrived this afternoon). And I just ordered some black and bronze plasti-dip that I'm going to try on the emblems (not sure if the bronze will match or not, so the black is a back up plan). Haven't used plasti-dip before but it doesn't look too hard. If I hate it I can peel it back off and just buy black emblems. And at some point, once my bank account can breathe again, I'll change out the front bumper.

All such projects will be documented on my YouTube channel. I've got a few JT projects on there already, such as the trailer brake controller, dead pedal install, and the rock rails. Or if you're interested in building an LS1 in a C5 Corvette for road racing, I got lots of videos for you, haha. https://www.youtube.com/c/ScrufsGarage/
2020 Gladiator Overland
Rusty's Off-Road 2" lift (2.5" F / 1.5" R)
35x12.5x17 Nitto Ridge Grapplers
17x8.5 Icon Rebound matte bronze wheels (-6mm offset)
https://www.youtube.com/c/ScrufsGarage/

Sorry for the delay, I've been out of town. Actually, just got back from racing in a 24 hours of Lemons endurance race this past weekend! (took 6th place out of 94 cars).

Any ways, finally got around to editing a review video and wanted to share with you guys. Gives a nice up close look at some of the components in the Rusty's kit.

And here's one more. I decided to do a before and after payload squat test. I loaded up 515 lbs in the bed and measured how much it squatted with the the stock Overland springs (439/440), and then with the Rusty's 2" lift springs.

The results actually surprised me. The Rusty's rear springs are significantly heavier/thicker than the stock springs. I think the difference in the amount of squat is likely because the Rusty's springs are dual rate. So initially you are in the softer rate potion of the springs... which also explains why they ride like OE. I imagine that if I continued to increase the weight, at some point it would get into the stiffer rate portion of the springs, which would be stiffer than OE.

And I apologize... when I did the bounce test initially, I still had all the weight in the bed. When I get the "after" bounce test (a couple weeks later), I had already taken the weight out. Regardless, the after is definitely less bouncy... but I believe that to be a result of the Fox shocks. 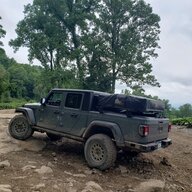 Nice video review, thanks for posting it up. I am doing the MOPAR 2" debate and looking for competitors. I appreciate the input and this will have me looking at rustys now too.

Really leaning towards this kit. I appreciate the time you spent in making the videos.

Regarding the trackbar brace, I currently have no play. I was wondering if you need to have any symptoms to get the TSB upgrade. I would like to have that upgraded before I install the brace as well.
Advertisement

Anyone Running Rebel Off Road Suspension?

Why doesn't FCA offer 2" lift as option for Rubicon model?
2 3