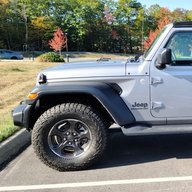 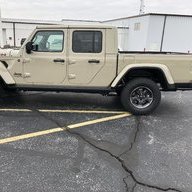 Murgatroid said:
We've reached the density now that I pretty well see at least one other Gladiator everytime I take a trip into town. And lately I've been seeing a white one just about everyday go by my house.
Click to expand...

When I took delivery of mine back in January there were 3 (including mine) in my neighborhood Of about 200 houses (approximately) there are now 7.

When I picked my adult son up at Publix yesterday, he said my Black Overland, that I’ve had for a week or two, was the best looking vehicle on the lot. My wife thinks it’s retro cute. My neighbors with f250’s and f150’s, some lifted, ask why the hell did I trade a ‘17 f150 Platinum in on it?

Me? It does everything I want, I have fun driving it and I wish I had bought it sooner.

Though, we will now look at an Unlimited, when it’s time to replace my wife’s Outback.