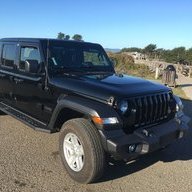 Jowen said:
Ahh just a thought, this as a tactical battle field vehicle or as a administrative fleet vehicle? We have both fleets plus a gsa fleet, just a thought. A lot less expensive to run a administrative vehicle that tactical vehicle in the middle of rush hour. In case your interested all the gsa vehicles are used until factory warranty is expired then auctioned off.
Click to expand...

Not necessarily, I drove a GSA motor pool Ford Ranger, that was already 6-8 years old, with more than 100K miles in it, and was told to drive it until it died, and died it did about six months later. GSA replaced it with a brand new Ford Ranger.
Cheers 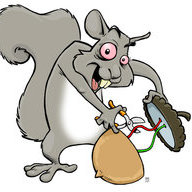 Fugly? Maybe. All up to personal taste. But functional.

I live in western Maryland and the deer population is enormous, carcasses all over the road. After seeing another JKU with its grill, hood and one fender destroyed I decided to build an outback bush style grill guard. Wasn’t beautiful but it was strong. Two weeks after I installed it a deer crossed my path at 50mph. Only a dented license plate to show for it. I win!

Would love to get that hood!

steffen707 said:
Holy Cow, took me 3 episodes of Dexter to do this. Had to take the grill bar off the smittybilt xrc, then put the XMT on it.
Click to expand... WASHINGTON, D.C., October 14, 2019 – Leading manufacturer of light tactical vehicles, AM General, together with the Jeep Brand of Fiat Chrysler Automobiles (FCA), today introduced a new light tactical concept vehicle at the Annual Meeting and Exposition of the Association of the U.S. Army (AUSA). The Jeep Gladiator Extreme Military-Grade Truck (XMT) by AM General is the first phase of a collaboration that reunites two companies whose histories trace back to World War II. In creating the Jeep Gladiator XMT, AM General leveraged the Gladiator’s class-leading capabilities and customized the truck to meet global customers’ needs for a light-weight military truck.

“We are extremely excited to partner with FCA and introduce the Jeep Gladiator Extreme Military-Grade Truck at AUSA,” said AM General President and CEO, Andy Hove. “This new venture gives us an opportunity to showcase our expertise in light tactical vehicles and help FCA maximize the Gladiator’s global reach and potentially enter new military markets.”

AM General identified the all-new 2020 Jeep Gladiator – the most capable midsize truck ever, with 7,650 pounds of towing capacity and up to 1,600 pounds of payload capacity – as the ideal platform on which to develop the Extreme Military-Grade concept vehicle.

“We’re proud to partner with AM General, we look forward to gauging interest and gathering feedback on the Jeep Gladiator XMT, and we’re excited about potential future opportunities,” Morrison added.

Based on its over 100 years of experience in the defense industry and deep knowledge of the global military landscape, AM General identified a series of parts and accessories that amplify the Jeep Gladiator’s leading off-road maneuverability and enhance the Gladiator’s capability to provide its end users with the appropriate equipment for tactical communications and service. The Jeep Gladiator XMT has been upfitted by AM General with both custom-built and commercially available military-grade parts to create an even more rugged truck that can traverse the toughest of terrains in adverse conditions and is ready to meet varied military customer requirements.

As with the iconic, proven and versatile Humvee, AM General can also apply its manufacturing and engineering expertise to convert the Gladiator XMT into mission-specific and purposeful light-weight tactical trucks based on customer requirements. Whether the need is to have a rugged personnel transport carrier or a command and control truck, the company has demonstrated through the Enhanced Tactical Kit (ETK) offerings on Humvee, its ability to deliver solutions that are customer-driven, and cost-effective.

Pending feedback and interest in the military marketplace, production could begin in the second half of 2020. In addition to the gas model, Gladiator XMT would be offered to military customers as a diesel version.

Jeep built its reputation on the battlefields of World War II, so it’s fitting that a modern Jeep off-roader will wear a military uniform. The vehicle in question is the 2020 Jeep Gladiator, the automaker’s recently-introduced midsize pickup truck. Because this is a military vehicle, the first thing Jeep did was add an acronym to the name. This truck is called the XMT, for Extreme Military-Grade Truck.

The Jeep Gladiator XMT was developed in concert with AM General. The company developed the Humvee, the vehicle that replaced the original Jeep in United States military service. AM General is still involved in defense projects. It decided that the Gladiator’s high tow and payload ratings made it a good basis for a military vehicle, according to a company press release.

Modifications included “both custom-built and commercially available military-grade parts,” according to AM General. Some of those modifications include a brush guard and tube doors that many civilian Gladiator owners would likely love to have on their trucks.

AM General said the Gladiator XMT could be offered with both gasoline and diesel engines, but did not offer any other details. Jeep currently sells the Gladiator with a 3.6-liter gasoline V6, making 285 horsepower and 260 pound-feet of torque, and plans to offer a 3.0-liter turbodiesel V6 beginning in calendar-year 2020, with 260 hp and 442 lb-ft. Tuner Hennessey shoehorned a 1,000-hp V8 into a Gladiator, but don’t expect that to be an option for military customers.

The Gladiator is the first production Jeep pickup truck since 1992, when the automaker stopped building the Cherokee-based Comanche. Just as that truck was based on an existing Jeep SUV, the Gladiator is based on the current-generation (code name JL) Wrangler. However, the Gladiator features a unique frame and rear suspension, as well as an upgraded cooling system, rear brakes, and axles to better cope with the stress of towing and hauling.

That is the bumper i want!

So, where is the .50 cal mounted in the bed? I think we should reboot the Rat Patrol....
Advertisement